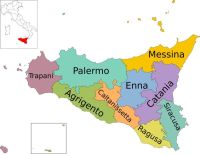 Sicily is the largest region of Italy and the largest island in the Mediterranean. They are part of Region 3 islands (Aeolian north Tyrrhenian Sea, the Egadi west between the Tyrrhenian and the Mediterranean Sea and the Pelagie Islands in the south-west in the middle of the Mediterranean) and other individual islands of Pantelleria and Ustica. Many marine areas are protected and are nature reserves. The landscape is hilly, with some plains and some mountain areas. To know and appreciate the virtues of a land historically infinite in terms of natural and cultural heritage need to stay for several days or visit it several times. Sicily and its islands are full of volcanoes and among those there are still active Mount Etna (which reaches a height of 3343 meters), Stromboli and Vulcano: 3 volcanoes that belong to different eruptive. From Etna spread throughout the north eastern area from the Arab occupation, for a thousand years, has been called Val Demone. In this area develop the provinces of Catania and Messina, where the dark color of lava mixes with the green forests of Nebrodi and Peloritani. A south is the Val di Noto from Siracusa to the island of the currents is the point of intersection between the Ionian Sea and the Mediterranean. In the West meets the Val del Belice with Palermo, Trapani, Agrigento and the center of Sicily. The coasts are very different with rocks, sand and gravel. Sicily has always been a land of conquest for its central location in the Mediterranean and every people has left the remains that can be enjoyed in all their profound beauty. From the remains of the first people of the Sicilians, the Sicani, the elimination, of Morgeti who lived in Sicily at the Phoenician city of Mozia, temples and theaters of the Greek civilization, the Roman buildings such as the Villa del Casale in Piazza Armerina, the cube Byzantine, palaces Arabs, Normans, French and Spanish. Not to forget the late Baroque enriched many cities in the Val di demon after the earthquake of 1693. As well as in culture materialized in the architectural, artistic, archaeological blends so food culture is an expression of the intersection of the Eastern traditions and Western Africa. The richness and variety of food and essences offered by the sea and from land worked by the Sicilians with the art of harmonious blend of different cultures such as couscous with fish or meat and sweets from the infinity of different flavors and refined as cassata, cannoli, almond paste, orgeat, granita The climate is mainly Mediterranean summers with long, dry, hot and mild winters. However, in mountain areas, temperatures are considerably lower. For example Etna there for several months the snow with sporting facilities for the sport of skiing. In the region at different times of the year you can take part in the secular and religious festivals, cultural events, music, theater and literature. In a land that has given important artists, scholars and writers of the world.